The End is Life…

The story is told in Mark’s gospel of Jesus and his “inner core” of Peter, James and John taking a walk up a high mountain where Jesus was “transfigured.” The voice of God spoke from a cloud that covered them and confirmed what Jesus’ miracles were pointing to all along:  “This is my Son, whom I love, listen to him” (Mark 9:7).  That seems about as succinct a statement as there can be for anyone who may be wondering, even today, what it means to be a Christian.

What I find fascinating is the conversation they had when they came down the mountain.  Jesus instructed them to not tell anyone of the experience until he had risen from the dead (Mark 9:9-10). This was not completely out of the blue because Jesus had several times predicted that he would suffer and be killed at the behest of religious leaders, but be raised to life again (see, e.g., Luke 18:32-33 & Matthew 17:22-23).  Here however, we see that the disciples discussed what “rising from the dead” meant (Mark 9:10). 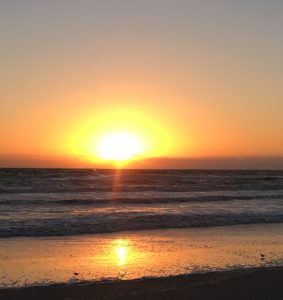 What Does Easter Really Mean?

With Easter around the corner, a lot of people all over the world will be talking about Jesus “rising from the dead.” We would do well to reflect, as the disciples did, on what that might mean.

In a powerful meditation called “The End is Life,” author/theologian Frederick Buechner observed that sometimes we give rather meager answers to that question, talking of the “miracles” of a beautiful life undimmed by 2000 years, or of a truth that never dies, or of doubt turning faith, or fear into hope.  “If I believed that this or something like it was all that the Resurrection meant,” said Rev. Buechner, “I would turn in my certificate of ordination…or at least I hope that I would have the courage to.” [1]  Instead, Buechner concludes that the Resurrection means Jesus was dead, and “he somehow got up, with life in him again, and the glory upon him.” [2]

His reasoning for rejecting the “meager” explanations is candid and convicting, and maybe something we can all relate to:

“If I thought that when you strip it right down to the bone, this whole religion business is really just an affirmation of the human spirit, an affirmation or moral values, an affirmation of Jesus of Nazareth as the Great Exemplar of all time and no more, then like Pilate I would wash my hands of it.  The human spirit just does not impress me that much, I am afraid. And I have never been able to get very excited one way or the other about moral values.  And when I have the feeling that someone is trying to set me a good example, I start edging toward the door.” [3]

Two Sides of the Same Coin

The apostle Paul echoes the thought, writing that if Jesus didn’t really rise from the dead and believers only have hope in Christ for this temporal life, “we are of all people most to be pitied” (1 Corinthians 15:19).  He becomes really blunt in pointing out the logical conclusion of rejecting or trying to explain away the accounts of the eyewitnesses who saw the resurrected Jesus, and their changed, emboldened lives: “And if Christ has not been raised, our preaching is useless and so is your faith” (1 Corinthians 15:14). We might as well eat, drink and be merry, for tomorrow we die (1 Corinthians 15:32).

The same deduction is made, though much more darkly, by the late Southern gothic writer Flannery O’Conner, through her character “The Misfit,” a sociopathic serial killer. As The Misfit goes about the gruesome task of dispatching an entire family he encountered when they had car trouble, he has this to say about Jesus:

That’s not exactly a thought that we associate with Easter, but the point from The Misfit and the apostle Paul are two sides of the same coin. If Jesus didn’t really rise from the dead, then why should any of us, even the cruel and twisted among us, care about what he had to say?

So that brings us back to the question discussed by the disciples, though perhaps with more urgency.  What does Jesus rising from the dead mean?  Or to us today, what really happened that morning?  Meager explanations are not really satisfying, and after that first Easter, the disciples would have none of them anyway.  They told anyone who would listen, regardless of the consequences, although they had seen Jesus executed on a cross, “God has raised this Jesus to life, and we are all witnesses of it” (Acts 2:32).  And though it eventually cost them everything, including their lives, their story never changed.   Plenty of people since then, and many today, might want to offer alternative explanations for this startling and miraculous news. But nothing short of the plain fact that Jesus died and was buried, and then became alive again and appeared to his disciples and many others, including over 500 people at one time, seems to adequately explain their changed and emboldened behavior.

The miracle doesn’t stop there, though.  Along the way, this rag-tag bunch of fishermen, tax collectors, zealots and uneducated, itinerant witnesses somehow convinced the western world, against all odds and the full force and fury of a world superpower (Rome), that their testimony was true. As St. Augustine observed over 1500 years ago, there are really “three incredibles” in this story:

In Romans 10:9, a verse very important in my own faith journey, the apostle Paul wrote: “If you declare with your mouth, “Jesus is Lord,” and believe in your heart that God raised him from the dead, you will be saved.”  Though undeniably incredible, believing the fundamental fact celebrated at Easter is hardly an irrational leap for the reasons eloquently stated by St. Augustine, among others.  But how does one “believe it in his/her heart?”  In that faith in anything or anyone is more about the doing than the thinking, it surely involves living as if Jesus is alive, just like he and the disciples said. It is living as if he is present with us in any trouble we face, and greater than any obstacle or resistance we encounter.  It is living like his words are as relevant today as when they were spoken.

The risen Jesus told his disciples, and us by extension, “Don’t be afraid”, and that he is with us always, even to the ends of the earth. That is the fundamental result of Easter, and very good news indeed. As Frederick Buechner concludes in his stirring meditation “The End is Life”:

“Anxiety and fear are what we know best in this fantastic century of ours. Wars and rumors of wars. From civilization itself to what seemed the most unalterable values of the past, everything is threatened or already in ruins. We have heard so much tragic news that when the news is good we cannot hear it.

But the proclamation of Easter Day is that all is well. And as a Christian, I say this not with the easy optimism of one who has never known a time when all was not well but as one who has faced the Cross in all its obscenity as well as in all its glory, who has known one way or another what it is like to live separated from God. In the end, his will, not ours, is done. Love is the victor. Death is not the end. The end is life. His life and our lives through him, in him. Existence has greater depths of beauty, mystery, and benediction than the wildest visionary has ever dared to dream. Christ our Lord has risen.” [6]

He is risen indeed – Hallelujah!