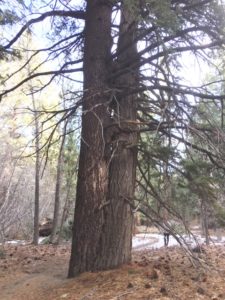 While hiking in the Nevada mountains over Christmas, I came upon a stand of Western White Pines.  Included were a couple of individual trees that grew so close to each other that they fused together over time.  The tops of each tree remained separate, but the base and first 7 feet or so of each tree had become one.  In fact, a large branch from one tree had been completely swallowed up in the trunk of the other.

Weather conditions in these mountains can be quite harsh, and the wind speed can regularly top 100 mph.  While some of the trees may be vulnerable to such winds, these two won’t be.  Being fused together, they are stronger than they would be alone.

Two are Better than One

The ancient writer of Ecclesiastes observed something that none of us can really dispute:

Two are better than one, because they have a good return for their labor: If either of them falls down, one can help the other up. But pity anyone who falls and has no one to help them up. Also, if two lie down together, they will keep warm. But how can one keep warm alone? Though one may be overpowered, two can defend themselves. A cord of three strands is not quickly broken” (Ecclesiastes 4:9-12).

We may, at times, wish we could go it alone, and sometimes we have no choice, but the fact we know in our hearts is that “no man is an island.”  Two are better than one. We need each other and are stronger together than we are apart.  “As iron sharpens iron, so one person sharpens another” (Proverbs 27:17).

The New Testament echoes the wisdom of the Teacher in Ecclesiastes.  For example, Paul exhorts the Galatians: “Carry each other’s burdens, and in this way you will fulfill the law of Christ” (Galatians 6:2). Elsewhere, he instructs the church at Corinth to “encourage one another” (2 Corinthians 13:11), and the Thessalonians to keep up their efforts to “encourage one another and build each other up” (1 Thessalonians 5:11).

I think back on my life and the times I have experienced the truth of this wisdom firsthand. There were times when I was on the precipice, teetering on the brink of personal disaster, and was only able to avoid calamity with the help of close friends.  Sometimes they provided encouragement, other times it was help. Still other times, it was accountability and “tough love.”  Whatever the particulars, I found great strength and comfort in knowing that I was not alone – that I had another friend or two who stood close beside me – and that there was nothing that I could not withstand or endure.  I was stronger together, like I observed in those Nevada pines.